What makes an effective campaigning organisation?

This education pack is designed to be used as part of an off-timetable day, but could equally be spread across a month of form periods. It is cross-curricular, with a primary focus on citizenship, but a strong secondary focus on history, and tertiary focuses on English, art, design and technology, and potentially other subject areas.

The pack is designed with five one-hour lessons in mind:

Lesson 1: When is it appropriate to campaign on issues that mainly affect people in other countries? PDF download

Lesson 2: Why was the British Anti-Apartheid Movement set up and how did it campaign? PDF download

Lesson 3: What core themes and messages should our own pressure group promote? PDF download

Lesson 4: What are the most effective ways of spreading our message?  PDF download

Lesson 5: What do effective pressure groups have in common? PDF download

This is a work in progress – if you teach at a school which would like to trial the pack, please contact

Congratulations to the students who won prizes and commendations in the ‘Make a Memorial to Oliver Tambo’ schools competition held to celebrate the centenary of Tambo’s birth in October 2017. The competition was organised by Park View School in Haringey, north London, in partnership with the Anti-Apartheid Movement Archive, Action for Southern Africa (ACTSA) and Brand South Africa.

‘We were overwhelmed by the amount of entries,’ said Daniel Lyndon, lead practitioner in Humanities at Park View. ‘At the school we set this as Year 7 homework so they’ve had six weeks to do the project and in total nine schools in Haringey have submitted entries. It was important to raise awareness about the work of Oliver Tambo. He’s not as well-known as he should be, so this was a good opportunity to celebrate his contribution in fighting for equality and freedom.’

One of the winning entries was a poem called ‘30 Years’ by Precious, aged 17, from Tottenham, who goes to Greig City Academy. ‘I didn’t know anything about Oliver Tambo before this competition but I found researching him and his life really interesting’, she said. ‘I took two days over this poem and was shocked to win because there was so many talented entries out there.’

‘I made a wire sculpture of his head’, said another award-winner, Stanley, aged 12, a pupil at Park View. ‘He was an amazing man who sacrificed so much and did his bit to change the world for other people who are suffering.’ 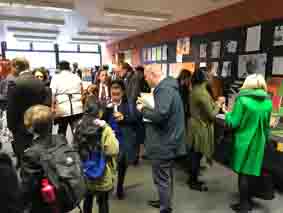 A prize-giving event was held at Park View on 2 November. The many diverse memorials were displayed with a ‘top table’ featuring the winning entries for the different age groups. Those present included former anti-apartheid activist and Cabinet Minister Peter Hain, Tottenham MP David Lammy and the Leader of Haringey Council, Claire Kober. The school’s Drama Group made a stunning music and drama presentation based on Nelson Mandela’s funeral eulogy for Oliver Tambo. Another student played his own keyboard arrangement of ‘Nkosi Sikelele’, South Africa’s national anthem.

Special thanks to Lela Kogbara, Tim Spafford, Dan Lyndon and Martin Spafford for organising the competition, and to Brand South Africa for sponsorship.

You can see more photos of the competition entries and the prize-giving on Park View School’s website here.